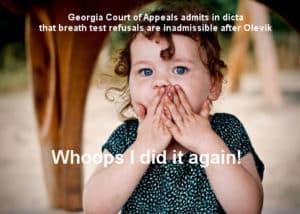 In State v. Council, 343 Ga. App. 583, 586; 807 SE2d 504 (2017), on September 15th, 2016, Susan Council was involved in a multi-vehicle automobile collision. Cobb County Police were told by emergency medical technicians that they believed Ms. Council was under the influence of alcohol. Ms. Council was polite, admitted to drinking 2 glasses of wine, consented to a portable breath test, and the Horizontal Gaze Nystagmus test (HGN). Council refused the 9 step walk and turn and one-leg stand test after the DUI officer reminded her that those tests were voluntary.  Council was arrested for DUI. She was read implied consent. Council asked if Georgia’s implied consent laws had changed. The officer refused to answer and re-read the Georgia Implied Consent rights. Council consented to test.  On the way to the precinct for testing, Council’s phone rang. The Officer refused to allow her to answer the phone. Council was worried about her 14-year daughter who was home alone. The Officer informed Council that once she was finished with the breath test at the precinct, he would allow her to call her daughter.

The council filed a motion in limine challenging the results of her HGN test, the constitutionality of her breath test, and probable cause. The Trial Court granted the motion to exclude the HGN test, held that the breath test violated the Georgia Constitutional Right against self-incrimination by acts or words, and denied the motion as to lack of probable cause to arrest.

The Georgia Court of Appeals held that although compelled breath tests are protected under the 4th Amendment from unreasonable searches and seizures, a consent to search will be held to be voluntary if the Officer uses no fear, intimidation, the threat of physical punishment, or lengthy detention to obtain consent. Free and voluntary consent eliminates the need for a warrant.

The Court of Appeals found in the Council case that there was no evidence that the Officer forced Council to take the Breath tests in order to call and check on her 14-year-old daughter who was left home alone despite the Trial Courts ruling which implied that was the case. The Court of Appeals found that Council either had to take the test or refuse the test to call her daughter, so refusing to allow her to make the calls was not coercive.

The key takeaway form this case (other than the Court of Appeal’s utter disregard of any evidence standard in exchange for a de novo review of a trial court’s ruling on coercion which is a mixed issue fact and law) is the recognition that the Olevik decision’s holding that the Georgia Constitution prohibits the admission of compelled breath tests, logically also prohibits the admission of the refusal of a compelled breath test. The second point is the cruel trilemma of the DUI Defendant. The DUI defendant is not faced with a binary choice of taking the state-administered breath test and risk blowing over the legal limit or verbally refusing the test and risk losing your license. There is also the third option of exercising your right to remain silent and having it deemed a refusal under the implied consent law. So if the Officer did make her choice binary with a verbal yes or no to the breath test, I would posit that is coercive.

Photo by Jelleke Vanooteghem on Unsplash.com