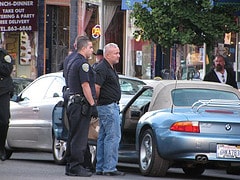 Carder v. State, A14A0221, Court of Appeals of Georgia, June 4, 2014.  Tammy Fay Carder was arrested for DUI, Reckless Driving, and driving on the wrong side of the road on August 4, 2008, after crossing over the center line and striking another vehicle killing a passenger while smelling of wine in Forsyth County. She was not charged until three years had passed well over the one-year statute of limitations for the Forsyth County DUI and Reckless driving. The Court of Appeals held that the felony charges of vehicular homicide can proceed even after the statute of limitations had run on the misdemeanor charges. See, Leachman v. State, 286 Ga. App. 708 (649 SE2d 886) (2007).  The Appellate Court declined Carder’s invitation to overrule that case since that decision seems to be well-founded. See also State v. Jones, 274 Ga. 287 (553 SE2d 612) (2001) (“expiration of the limitations period for the underlying felony does not preclude a prosecution for felony murder.”).